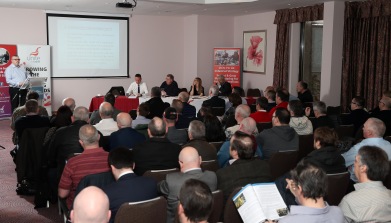 “Unite joined with Manufacturing NI, who represent employers in the sector, to challenge our politicians to make real their commitment to an Industrial Strategy for Northern Ireland.

“We need action on skills, on vital infrastructure, on lowering energy costs, on developing sub-supply chain and on maintaining market access. The draft economy-wide ‘Industrial’ Strategy, Economy 2030, only launched days ago by the Minister, before our conference, include no real actions and is much to vague. We need SMART objectives (Specific, Measureable, Achieveable, Realistic and Time-Bound) to really deliver what’s needed.

“Today’s event was only the latest in our ongoing campaign on this issue. We will continue to campaign alongside Manufacturing NI, and engage with whoever is elected on March 2nd. The needs of this vital economic sector will continue to be our priority”, Mr Kelly concluded.

A range of speakers provided informative presentations on the state of Northern Ireland’s high-end Manufacturing, the challenges of Brexit and UK Industrial Policy. Deputy Regional Secretary, Jackie Pollock commenced with an outline of the union’s new publication giving detail on the Joint Proposals, with Manufacturing NI, for an Industrial Strategy.

All political parties were invited to participate on a panel discussion on the subject. Speaking during the afternoon session were Alex Maskey, Sinn Féin; Claire Hanna, SDLP; and Steve Aiken, UUP. They were joined by Davy Thompson, Unite Regional Coordinating Officer and Michael Ryan, Vice-President and General Manager, Bombardier.