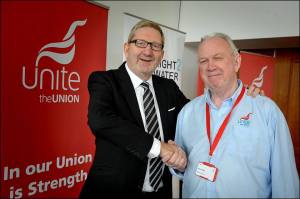 October 27th: Speaking ahead of the launch of his union’s proposals for an economic alternative, Len McCluskey, Unite General Secretary said:

“Unite welcomes both the First Minister and Deputy First Minister’s support in launching our proposals for an alternative approach to growing Northern Ireland’s economy.

“We believe they provide a blueprint for building an economy in Northern Ireland that underpins the peace process and seeks to harness the talents of everyone. The NI Executive is facing significant budget constraints because of the austerity agenda of the Conservative government, but there are alternatives which build for a future based on investment and decent jobs, where people are paid a decent day’s wage for a decent day’s work.

“That is why Unite has identified key areas where we believe the NI Executive can support the economy and industrial development. Some of these ideas might need legislation or even negotiation with the UK Treasury but they are all realisable and vital if Northern Ireland is to fulfil its potential.

“This blue print is we hope the start of a dialogue and we look forward to working with politicians, business and civic society in ensuring Northern Ireland has an economy that can meet the challenges of the 21st Century.”