Northern Ireland’s health service must benefit from budget bonus with, or without, Executive 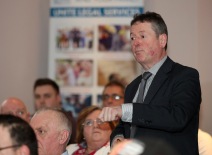 Responding to the UK budget announcement of an additional £2.8 billion for the NHS, Kevin McAdam, Unite Industrial officer called for Northern Ireland’s Health & Social Care service to get its fair share:

“Today’s announcement by the Conservative Chancellor of the Exchequer, Philip Hammond, of a belated increase in the budget for the NHS is a welcome one, albeit one where we will have to analyse just how much of this extra funding is genuinely additional.

“For the last ten years funding for the NHS has fallen far behind in real terms with increases inadequate to meet rising inflation, greater demand and the cost of ever more private sector profits being extracted. The result has been a service squeezed of resources and workers pushed to breaking point.

“Today’s announcement is a first step in the delivery of a promised £8 billion in NHS funding over the lifetime of the current parliament, committed to by the Conservatives in their election manifesto. Even the entirety of this funding, assuming it is genuinely additional, would be inadequate to meet the forecast NHS funding shortfall – estimated as being as high as £30 billion by 2020/21”, Mr McAdam said.

“The funding situation for Northern Ireland’s Health & Social Care system is particularly desperate. The failure of successive Health Ministers to deliver progressive reform of the HSC has meant that Northern Ireland healthcare outcomes are now lagging at the bottom of virtually every index. But it’s not just patients who are suffering, those healthcare workers who choose to remain in Northern Ireland have seen their living standards plummet with one percent pay cap leaving them the lowest paid in the UK.

“Northern Ireland’s healthcare workers must now benefit from the announcement that pay can exceed the one percent pay cap; indeed, we need to see full UK-wide pay equalisation for all NHS workers. This is the only way to address the skills crisis resulting from loss of critical staff.

“The UK government must provide assurance that the NHS in Northern Ireland will not be denied its full share of the additional £2.8 billion – regardless of whether or not there is a functioning Executive. The most vulnerable people in Northern Ireland and our healthcare workers cannot be asked to pay the price for the failure of our politicians”, Mr McAdam finished.