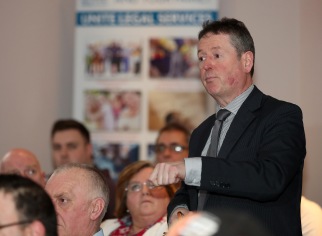 Kevin McAdam, Regional Officer for Unite issued an open letter on behalf of Unite in Health, the health section of his union, through the press formally responding to last week’s announcement by all five Health and Social Care Trust Boards of proposals to deliver a further £70 million in cuts to healthcare provision:

“Unite does not believe these proposals are anything more than the trusts dodging their responsibilities to the public by seeking to have the public self-select which treatments should be refused to them. We believe this is obscene and unfair to many vulnerable people in this community.

“The proposals are nothing more than an attempt to deliver agenda of the Permanent Secretary of the Department of Health. We believe the Permanent Secretary, through the Trusts, is playing political football with the public’s health, well-being and safety in the absence of a locally-accountable Health Minister; indeed, he seeks to undermine all that the previous minister, with cross-party support, sought to achieve.

“These cuts will have a disproportionate and immediate effect on the old and vulnerable in society. The very people for whom the NHS was established! They are purported to be temporary, to the end of the financial year, but we remember that they said the closure of the Belfast City Hospital Emergency Department would be temporary SIX years ago – we simply cannot believe such baseless assurances today!

“The Trusts’ sums simply don’t add up – many of these cuts will be self-defeating and result in higher long-term costs. If you close domiciliary and nursing home care in the community, the public will have no alternative but to present at emergency departments – and block the service further.

“That the trusts would put such proposals out for consultation is worrying. It demonstrates a failure on the part of Trust management boards to stand up to the Department of Health and demand the funding necessary to deliver adequate healthcare for the people of Northern Ireland – their legal responsibility. If they can’t do that then the Trust Boards are failing in their statutory duty to deliver healthcare to our citizens.

“We will not stand idly by and watch the NHS in Northern Ireland die before its seventieth birthday on July 5th next year! Unite will work with other trade unions and the community to oppose these cuts to OUR PRECIOUS NHS”, Mr McAdam ended.