As Delfin pickets resume tomorrow, unrest in sector spreads with dispute at IBAT

Posted on November 10, 2019 by unitetheunion 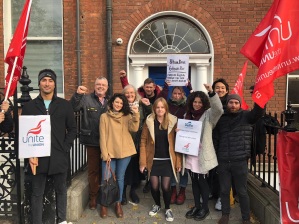 November 10th: Unite, which represents English Language Teachers throughout Ireland, today (Sunday) announced that pickets will resume tomorrow at Delfin English School while members in IBAT have also voted to take industrial action and will be holding a series of one-hour stoppages starting tomorrow with the potential for escalation if issues in dispute are not resolved.

Teachers at Delfin will be taking strike action from  November 11th to November 15th inclusive, and from December 2nd to December  6th inclusive.  Teachers at IBAT will be holding one-hour stoppages (morning and afternoon) tomorrow and Friday, as well as on November 18th, 22nd, 25th and 29th.

“The international education sector, of which ELT is a large part, is booming, with the government projecting that the value of the sector will grow to over €2 billion by next year.  Committed, experienced and highly-skilled teachers are central to that success, yet they are often low-paid and often employed on precarious contracts.

“Rather than talking collectively to teachers about their concerns through the union of their choice, school management often rely on a culture of intimidation to squeeze pay and conditions while maximising their profits.

“Based on the feedback from our members, Unite believes that unrest in the sector will continue to spread unless and until there is a negotiated collective agreement.  We are hopeful that the Labour Court will recommend such an agreement in the near future”, Mr Byrne said.

2 Responses to As Delfin pickets resume tomorrow, unrest in sector spreads with dispute at IBAT