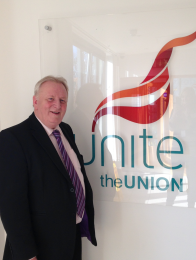 Davy McMurray, Unite Regional Officer responsible for his union’s membership at Dundonald International Ice Bowl has confirmed his union will be commencing a ballot on strike action likely to coincide with the forthcoming Northern Ireland Bowling Open at the venue.

“Through their dishonest stalling in pay talks, management in Lisburn & Castlereagh City council have left us with no alternative but to ballot our plant engineers in Dundonald International Ice Bowl for industrial action. The dispute centres around the demand of plant engineers for full pay equality with other engineers employed by Lisburn & Castlereagh City council. The union was promised that this issue would be resolved at the end of March but here we are at the end of April and there’s no sign of any serious engagement from management side whatsoever. Management’s approach to negotiations has left workers questioning whether they are serious about addressing the pay equality issue at all.

“Strike action by plant engineers at the centre will compromise health & safety operations at the venue forcing its effective closure. Giving the timing of the ballot we are already red circling the dates May 24th to 26th for strike action; as such we are warning management that should this strike proceed, it is likely to coincide with, and seriously impact, the planned Northern Ireland Bowling Open which is set to come to the venue for the first time in twelve years.

“We are calling on the bosses in Lisburn & Castlereagh City council to engage positively with our union, meet the legitimate demands of the Dundonald engineers and avoid any unnecessary disruption to this high-profile sporting event”, Mr McMurray concluded.