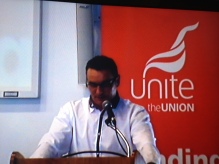 August 10th: Responding to Bombardier plans for almost one hundred redundancies among its permanent workforce in Belfast, Davy Thompson, Regional Coordinating Officer for Unite reiterated his union’s call for a proactive strategy for heavy manufacturing:

“Bombardier has informed their Belfast workforce that almost one hundred permanent workers are to be made redundant with the potential that further losses will be felt in its agency staff. This announcement brings to 735 the number of workers at the former Shorts site who are set to lose their jobs this year.

“Unite is calling for urgent talks with Stormont Ministers to discuss what has been an ongoing, consistent theme of closures and redundancies over the past two years.

“The heavy manufacturing sector has been decimated by three major closures in the Belfast and Ballymena areas and we have witnessed a drip feed of redundancies in Bombardier (Shorts), Caterpillar (FG Wilson) and most recently at DuPont site in the North West. These losses now amount to thousands of direct and indirect job losses.

“We have heard all the nice words from Stormont and can expect more of the same again today but we continue to wait for them to announce what plans they have to support this vital sector. Indeed it’s only weeks since both Executive parties combined to defeat a UUP motion calling for a dedicated strategy for manufacturing – a proposal Unite has been advocating for more than eighteen months now.

“The failure to commit to a stand-alone industrial strategy in Northern Ireland is inexplicable when we face particular challenges in the context of the recent Brexit vote and compares to a situation where even the new Tory Prime Minister has announced she will be bringing forward an industrial strategy for England”, Mr Thompson concluded.