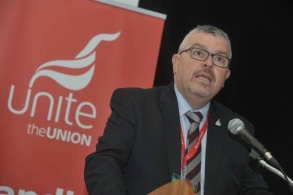 Trade union movement must apply methods of yesterday, in conditions of today, for a better tomorrow

April 12th: Jackie Pollock, chair of the Northern Ireland Committee of the Irish Congress of Trade Unions and deputy Regional Secretary of Unite opened the Biennial Delegates’ Conference in Derry/Londonderry. He recalled the lessons of his early years as a shop steward in Harland and Wolff:

“At every union meeting – there was always someone at the back of the room – before you even opened your mouth who would shout ‘Tell the men the truth’. It was a command that stuck with me, through my time as a steward, convenor and a trade union official. With that in mind I want to be very frank in my address today.

“If we summarise today in the year 2016, welfare, pensions, NHS, wages, etc, are all under attack. The trade union movement bringing behind it all other sections of the oppressed of our society won these gains – now they are being taken away.

“We have lost ground over the last 30 years – both in terms of density but also authority as neoliberal ideas have battered at the idea of solidarity and the most basic principle that an injury to one is an injury to all.

“We know that weakness invites aggression – and unfortunately we are feeling this aggression from Westminster, Stormont and employers; aggression in the form of brutal cuts, the smashing of the welfare state and the downgrading of work and conditions.

We also know that – defeats for the working class, just like gains won, are never permanent. The relevance of the trade union movement is more pronounced than ever before.

“We can talk to anyone, listen to anyone but we shouldn’t ever hitch our wagon to any force other than the working class. This means we have to question is it effective to have a partnership with government? It is effective to have partnerships with employers? Because we are not in this together.

“When Michelin, JTI Gallaher closes – when workers are laid off in Shorts – it isn’t politicians or employers who lose it is our members and their families lose. When there is a blood sacrifice of 20,000 public sector jobs to lower corporation tax for employers – we certainly aren’t all in it together.

“Stormont cannot turn the trade union movement on and off when there are difficulties with the Peace Process – and vilify us with employers when we have the audacity to demand decent jobs, decent wages, decent pensions, decent houses, an NHS to be proud of, a proper education for our children, proper facilities in terms of social care, and how dare we demand equality, human rights and an inclusive process for dealing with the past.

“Every core value of trade unions is an obstacle to the Tory plans. We must make ourselves relevant to a new generation.

“We must look forward in confidence for a brighter future. We must find the strength of conviction of those who built our movement. We must find new ways to apply the methods of yesterday, in the conditions of today, for a better tomorrow. An active trade union movement is more vital today than it has been in generations”, Mr Pollock continued.