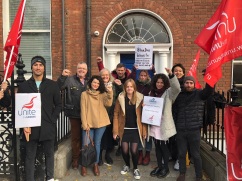 October 30th: Unite Regional Secretary Jackie Pollock addressed workers on the Delfin English School picket line in Dublin today (Wednesday).  Mr Pollock said that Unite will do “whatever it takes” to vindicate the teachers’ right to be represented by the union of their choice.  Teachers at Delfin have been engaging in a series of stoppages on foot of the company’s refusal to talk to the union about a range of issues, from low pay to unpaid breaks and effective Christmas layoffs.

“Unite has been organising in the highly profitable English Language Teaching sector since 2017, and everywhere we have encountered the same story.  It’s a story of low pay, precarious working conditions and a refusal to negotiate collectively with teachers.

“English Language Teachers are committed to their profession and to their students.  No worker takes industrial action lightly, but Delfin teachers have been left with no option but to withdraw their labour in order to secure decent working conditions.

“They have the full support of Unite, of our members throughout Ireland and Britain, and of our fighting fund.  We will do whatever it takes to vindicate our members’ right to negotiate collectively with their employer through the union of their choice.

“The ELT sector is highly profitable and is likely to become even more so in the aftermath of Brexit.  Teachers have been critical to the success of the sector, yet they have not shared in that success.

“Delfin teachers are the first workers to take industrial action in the sector.  Unless conditions improve, they will not be the last.

“Unite has long argued that issues in the English Language Teaching sector can only be addressed through a negotiated collective agreement, and we are hopeful that the Labour Court will recommend such an agreement in the near future.

“In the meantime, the resolution of this dispute is in the hands of Delfin College.  All they need to do is sit down and engage collectively with their workers”, Jackie Pollock concluded.