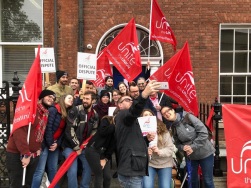 October 27th: Unite, which represents English Language Teachers throughout Ireland, today (Sunday) warned that the current dispute in Delfin English School may be just the first in a series of strikes in the sector unless a collective agreement is negotiated.  Teachers at Delfin are preparing for a further two-day stoppage on Tuesday 29 October and Wednesday 30 October.  Issues in dispute include low wages, unpaid breaks, effective layoffs over Christmas, and the company’s refusal to negotiate collectively with workers through the union of their choice.

“Delfin management have left Unite members with no option but to take industrial action to secure decent working conditions.

“While this is the first strike in the English Language Teaching sector, it may not be the last unless and until there is a negotiated collective agreement.  We are hopeful that the Labour Court will recommend such an agreement in the near future”, Mr Byrne stated.

This entry was posted in Uncategorized. Bookmark the permalink.