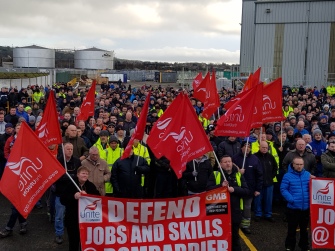 March 14th: Susan Fitzgerald, Unite Regional Coordinating Officer responsible for Bombardier confirmed that shop stewards this morning met with a delegation of Belfast councillors, including the Lord Mayor, ahead of the councillors’ meeting the company’s management over compulsory redundancies in Northern Ireland. The meeting was a second one with councillors and followed a meeting with political representatives from Ards and North Down council.

“Unite shop stewards provided visiting councillors with detailed information on the compulsory redundancies being sought by Bombardier corporate management as part of a cull of 5,000 jobs globally which was announced last September. The reps made the point to councillors that in 2011, Bombardier employed more than eleven thousand workers in Northern Ireland; in 2014, this figure had dropped to 7,100 and after the current round of redundancies – 490 in Northern Ireland – this will stand at 3,600. That means in eight years the Bombardier workforce has fallen to one-third of what it was”, Ms Fitzgerald said.

As part of their broader campaign against management plans to implement compulsory redundancies, Unite workforce representatives have now had positive meetings with party leaders from both Belfast and Ards and North Down councils with the aim of getting them involved in the fight to reverse the loss of highly-skilled jobs.

“Unite is opposed to all compulsory redundancies and it is particularly rotten that Bombardier are attempting to force one hundred workers out the door when, for various reasons, there are others who wish to go and have been refused voluntary redundancies.

“The current job losses confirm that Bombardier corporate management is more focussed on prioritising increased profits for shareholders and repayments to bondholders than on the workers who generate that surplus. When they announced that 5,000 jobs were to go they promised the financial markets that this would reduce operating costs by $250 million but let us remember this is a company which made a net surplus in excess of one billion dollars in 2018. These redundancies are driven by management’s attempts to satisfy the insatiable demands of the financial markets”, Ms Fitzgerald concluded.