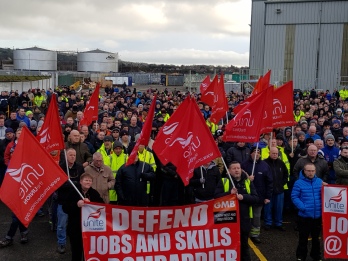 Workforce are questioning why Northern Ireland sites are facing the threat of compulsory redundancy while in Canada workers are being ‘reclassified’ rather than let go.

“Unite representatives have engaged with Bombardier management in an effort to seek to mitigate last September’s announcement by corporate bosses of 490 redundancies in Northern Ireland. While we are opposed to the loss of any jobs, it is crazy to force workers out the door when others for various reasons are looking to go, there is no basis to compulsory redundancies.

“The refusal by corporate management to provide the upskilling and training necessary for workers to transition between roles and avoid compulsory redundancies is reflective of a wider failure to properly resource their Northern Ireland sites. Employees here are now the only ones facing the threat of compulsory redundancies, while the remainder of the five thousand job losses announced globally have yet to be delivered or have been entirely mitigated through voluntary redundancies and other transfers.

“Bombardiers’ workforce in Northern Ireland now stands at just over 3,600, the lowest it has ever been, with just over one hundred of those indirect or agency workers. Five years ago it was almost twice that number. The company’s global management team must show their Northern Ireland employees that they mean more than the insatiable demands of corporate investors. They must make real their promises of future substantial employment growth – key to that must be investment in workers’ skills for a future”, Ms Fitzgerald said.