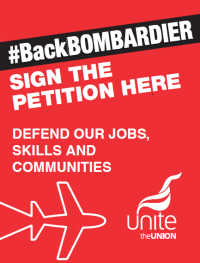 The UK is the second biggest Boeing client globally. Wecall on the government to follow-through on their words and use their leverage to defend Northern Ireland jobs from US protectionism; to compel Boeing to withdraw their meritless case and lift the threat hanging over thousands of Northern Ireland workers.

More than 4,000 aerospace workers are employed by Bombardier in Northern Ireland; sustaining a further 20,000 in the local economy. These jobs are threatened by the 300% import tariffs on Bombardiers C Series proposed by President Trump’s administration on behalf of Boeing.

Please sign this petition.  At 100,000 signatures, the topic will be considered for debate in Parliament.

Note: Only British citizens or UK residents can sign.