Unite in the community launch campaign to defend library access 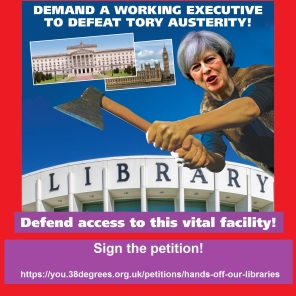 “Unite in the community members across Northern Ireland know the value and importance of libraries. Unfortunately it appears that our political leaders in Stormont don’t as they cut funding for libraries from £29.4 million to £26.3 million over the last two years.

“These austerity cuts have run-down our libraries with many services being removed. We have defeated previous attempts to cut opening hours unfortunately, we are once again faced with the threat of cuts to opening hours but this time we are being told that the cuts are only for the Summer. There are genuine concerns that these ‘temporary’ cuts could become permanent meaning a downgrading of library opening access by stealth.

“Libraries perform a vital function in our society. They can offer a first experience of the world of learning for young children, they accommodate students from low-income households who need to access IT services, they allow job-seekers to make applications and write CVs, they provide a safe and welcoming social space for our senior citizens. Cutting budgets for libraries is innately regressive. Libraries are social spaces where people come together. They are not valued by neoliberal politicians precisely because they are not profit-making.

“These latest cuts to library opening hours are proceeding when there is absolutely no-one accountable. We have no government either in Stormont or in Westminster. There’s a democratic deficit but major decisions are being made that are affecting our communities.

“Unite in the community is launching a campaign to defend access and defeat proposals to cut opening hours. We are asking people sign our online petition and demonstrate their support for our libraries. Our branches will be taking this campaign out to communities across Northern Ireland in the weeks to come.

“The local political parties must put aside their differences and re-establish a functioning executive to reverse these austerity cuts and keep our libraries open”, Mr Hewitt concluded.