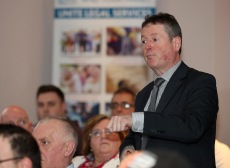 Unite Regional Officer Kevin McAdam announced that his union would be fully supporting protests called by the Saving Daisy Hill Hospital campaign at the next meeting of the Southern Health & Social Care Trust Board in Craigavon hospital this coming Thursday (April 27th) at 11am.

“The Southern Health Trust’s plans to restrict opening hours for the A&E at Daisy Hill Hospital to 8am to 8pm threaten immediate and potentially devastating consequences for the entire community in the Newry, Mourne and South Armagh areas. Patients will be required to attend the Craigavon A&E which would mean a one hour ten minutes ambulance journey in the case of someone from Annalong – leaving them outside the ‘golden hour’ which is considered essential for patient safety.

“Unite believes that this is likely to be only the first in a sequence of cuts to Daisy Hill. It will take provision in the Southern HSCT area that bit closer to the Department long-standing ‘Golden Six’ model for acute hospitals. Once it is downgraded to only a part-time service, the pressure will then be on to close it entirely – and that will affect the breadth of other services provided in the hospital.

“These cuts are being made at a time when ambulance services are already under enormous pressures. Our NIAS members tell us that the capacity is simply not there to accommodate the additional demand that will arise from this proposal. Patient safety must be an immediate concern.

“Indeed, our underfunded A&E services are already in crisis. In some hospitals, we have seen consultants having to treat patients in ambulances as they queue due to the inability to secure free beds. This is a disaster waiting to happen.

“This decision appears driven by an agenda which seeks to engineer crisis in the NHS to be subsequently exploited by the private sector. Was it coincidental that when the A&E closed in Belfast City hospital within months a private sector A&E opened on the Windsor Road? People’s legitimate fears are being exploited to undermine our NHS.

“Unite’s industrial branches will join our community membership branches to protest alongside the campaign outside this Thursday’s Southern HSCT Board meeting in Craigavon. Unite will be providing free transport and refreshments for anyone who wants to attend. We want to let them know the strength of our opposition”, Mr McAdam concluded.