Caterpillar announcement another blow to NI Manufacturing base

Posted on September 1, 2016 by unitetheunion 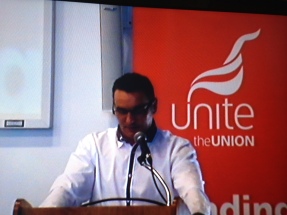 Executive parties acting as if manufacturing is a lost cause, Northern Ireland needs a stand-alone strategy

September 1st: Unite Regional Coordinating Officer, Davy Thompson, responded to today’s job-loss announcement by Caterpillar which has left hundreds of workers and their families facing redundancy or concerns for their future employment:

“Unite will be fully engaging with Caterpillar management during the upcoming consultation period and will seek to minimise the impact of this announcement and secure our members’ employment.

“Last year, Caterpillar indicated that the five thousand redundancies it brought forward globally were likely to increase to ten thousand by the end of 2018. Unfortunately, our political representatives stood idly by and did nothing to minimise the threat this posed to Caterpillar’s Northern Ireland workforce. It is vital that we now see real action to safeguard as many jobs and lines of production as we can.

“The Northern Ireland Executive parties appear to believe that Manufacturing is a lost cause. They voted down proposals for a stand-alone strategy for the sector and there’s continued failure to win Foreign-Direct Investment in the sector.

“Thousands of experienced, highly-skilled and now redundant, manufacturing workers need appropriate employment opportunities. Giving up on manufacturing is not an option for these workers or the communities which face post-industrial futures.

“Despite thousands of job losses, Executive Ministers want to deny the fact that there’s a crisis in Manufacturing. By only considering the past three years’ statistics, they claim that total industrial employment is increasing but the reality is that more than three thousand four hundred jobs have been lost in the sector in the last ten years; and that is before the recent major job-losses and closures are counted. Total employment in Manufacturing remains below its pre-recession peak.

“Contrary to Ministerial statements the sector is moving down, as opposed to up, the value chain with job-losses concentrated in some of the highest-skilled manufacturing sectors and job creation happening in lower-skilled sectors.

“Today must mark a turning point in Stormont’s industrial policy. Unite is writing to both Economy and Finance Ministers to urge them to adopt a stand-alone Manufacturing strategy which will focus attention on the need for real action to help our industrial base”, Mr Thompson concluded.