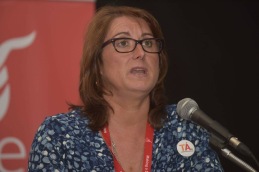 April 13th: Speaking at the Northern Ireland Committee of the Irish Congress of Trade Unions Biennial Delegates’ Conference in Derry/Londonderry Taryn Trainor, Regional Equality Officer for Unite, called on the trade union movement to oppose the criminalisation of young working-class women following a recent conviction of a woman for taking abortion pills:

“Given the negative, sensationalised media reporting of this young woman, it’s imperative that NIC-ICTU now takes a stand.

“The trade union movement should involve ourselves because women who have abortions work and so do their partners. They work in schools, hospitals, offices, shops and factories. Their holidays need to be authorised and very often their sick records are monitored.

“This young woman now has a criminal record which will have implications for her future career. It will also stop her from obtaining visas to travel.

“Is it the case now that women are going to have to justify miscarriages in case anyone suspects they took abortion pills?

“Conference, I’m asking all delegates to ensure their unions adopt pro-choice policies. I’m asking NIC-ICTU to publicly condemn this prosecution and lobby the PPS to drop all further charges under this outdated law”, Ms Trainor concluded.