Posted on October 8, 2015 by unitetheunion 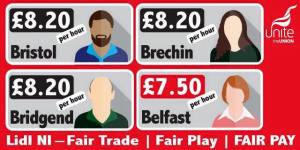 Company u-turn demonstrates power of workers getting organised with Unite

October 8th: Unite Regional Officer, Susan Fitzgerald, welcomed Lidl’s announcement that it would now include workers in Northern Ireland under an £8.20 an hour ‘Living Wage’ it had previously offered only to workers in England, Scotland and Wales:

“This is a very significant victory for Lidl workers, our members and Unite, who led the campaign to demand equal pay for workers in Northern Ireland.

“It is clear that Lidl had no intention of paying Northern Ireland workers the same as those in England, Scotland and Wales. This victory has been won by workers joining Unite and getting organised as well as the strength of the wider solidarity expressed behind our #LidlFairPay campaign.

“We believe Lidl must now reconsider their decision to dismiss a worker whose only crime was to question the fairness of Lidl pay policy on Facebook.

“This announcement means other retail chains are now ‘on notice’ that they need to pay the Living Wage – there can be no justification for poverty-pay.

“We are particularly pleased that Lidl’s adoption of the Living Wage will extend to their workforce in the Republic of Ireland. This is an all-island victory for both Lidl staff and Unite.

“Our union will now call off the protests we were organising for later today outside Lidl supermarkets in Belfast and Derry. We will also withdraw from initiating a legal challenge over pay discrimination.

“Unite will continue to build our membership base in Lidl with a focus on addressing the minimum hours and precarious nature of contracts held by many workers. It is vital that all workers have the security and guaranteed hours to mean this Living Wage announcement translates into Living Pay”, Ms Fitzgerald concluded.