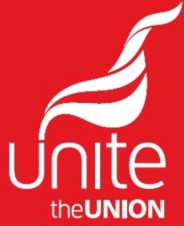 September 27th: Davy Thompson, Unite Regional Coordinating Officer, demanded that the System Operator for Northern Ireland (SONI), of  immediately review its decision to refuse Capacity Market Remuneration contracts to two generators at Kilroot power station and one generator at Ballylumford B, which poses an immediate threat to the livelihoods of 270 workers, many of whom are Unite members.

“Since SONI announced their decision to exclude generators in both Kilroot and Ballylumford from contracts to supply the upcoming all-Ireland Integrated Single Electricity Market (ISEM) in January, Unite has questioned the rationale for their decision. SONI’s decision directly threatens to make redundant 150 AES workers onsite as well as the 120 direct, full-time contractors who are employed by local firms who provide services onsite. It also threatens to make Northern Ireland dependent on electricity supplied by the Republic of Ireland at the very time when the future security of such arrangements are threatened by the Brexit process.

“The idea of removing 36% of Northern Ireland’s domestic electricity generating capacity at the very time when the ability to buy-in electricity is under question and when progress towards the north-south electricity interconnector is stalled due to the absence of a locally-accountable Executive is indefensible.

“In light of today’s revelations, leaked to the BBC, that the British government has identified a risk that the single-electricity market might break into two as a result of Brexit, SONI must now review its decision to refuse these contracts to supply. It is vital that they do so with urgency as the new contract period will come into force at midnight on Sunday. Northern Ireland manufacturing cannot run the risk of electricity blackouts at a time when they face mounting Brexit uncertainties”, Mr Thompson said.

Note for editors: SONI is owned by Eirgrid, itself owned by the Irish government, and which manages and operates the transmission grid across the island of Ireland