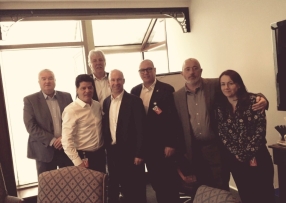 January 26: Steve Turner, Unite assistant general secretary expressed his relief that the US International Trade Commission (ITC) had overturned the imposition of crippling import duties on Bombardier’s C Series: “Bombardier workers in Northern Ireland and throughout the supply chain in UK will be breathing a huge sigh of relief that the International Trade Commission has seen through Boeing’s baseless complaint.

“It is a right and just decision which is in no small part down to the tireless campaign by Unite members and shop stewards.

“Unite left no stone unturned in our campaign to protect jobs in Bombardier and the supply chain across the UK. When the going got tough Unite did not throw the towel in, our members and shop stewards redoubled their efforts in bringing pressure to bear on politicians in Washington, Westminster, Brussels and Northern Ireland.

“The C Series is a world beating aircraft made by world class workers. There can be no backsliding from the US government on this decision.

“Unite looks forward to continuing to work with Bombardier to secure future sales and investment to ensure a bright future for Northern Ireland workers and the thousands across the UK in the supply chain.”

Susan Fitzgerald, Unite regional officer for the union’s membership at Bombardier in Northern Ireland said that the decision showed what could be achieved when workers stood together, organised and mobilised to defend their interests:

“Today’s decision shows the power of our union and of a mobilised workforce.

“Despite the fact that Boeing had not suffered and never could have suffered any loss from the Bombardier C Series this decision had to be won by our members.

“When the story is told of this dispute it will be one of how, in the absence of a genuine effort by politicians and the UK government, workers themselves had to take the fight on.

“It was workers who walked the halls of Westminster seeking politicians support, or speaking before parliamentary scrutiny committees raising their awareness. It was workers who relentlessly travelled to Brussels, Montreal and Washington to make the case, workers who took the campaign to every council in Northern Ireland and who mobilised in their thousands.

“Workers and their trade unions reached out across continents to find common cause despite the corporate dispute ranging above their heads.

“At this time when every day seems to bring more news of job losses or attacks on workers’ pay, or threats to public services, this campaign shows just what workers can do when they get organised and the power of a fight-back union like Unite.

“While celebrating this victory we must take nothing for granted. This decision must now be enforced; Bombardier itself now must reiterate its commitment to the Northern Ireland workforce and end the outsourcing of jobs to low-cost centres”.