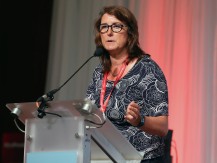 January 23rd: Taryn Trainor, Unite Regional Officer for the union’s membership in Sainsbury’s raised concerns that the impact of the company’s restructuring plans would be further exacerbated by the rise of automation and self-service tills:

“The positions of Store Supervisor, Team Leader and Deputy Manager are set to disappear across the UK on June 11th as part of restructuring plans announced by Sainsbury’s management today.

“On the basis of figures we have been able to compile in relation to individual sites, we estimate that approximately 130 positions are likely to go as a result of this proposal in Northern Ireland.

“There are thirteen Sainsbury’s supermarkets in Northern Ireland and Unite holds recognition rights for the workforce in seven of these: Newry, Armagh, Dungannon, Derry/L’Derry, West Belfast, Holywood, Craigavon. We will be engaging with management to ensure that anyone affected by these changes is found appropriate employment elsewhere within the company.

“These staff reductions in Sainsbury’s, and those in Tesco yesterday, are doubly-concerning insofar as we are likely to see reduced staffing levels in the future with the rapid growth of automation and self-service tills”, Ms Trainor said.