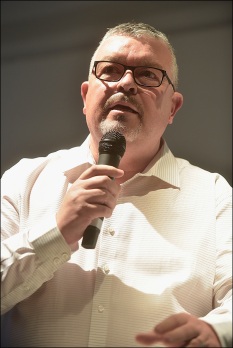 “Carillion employs approximately five hundred workers in Northern Ireland, almost half of whom are employed in social housing maintenance work for the Housing Executive. In response to this morning’s announcement that Carillion had gone into liquation, Unite organised a mass meeting of their workforce for social housing maintenance contracts. We provided the workers present with an update on our actions to defend jobs and to secure their backing for our strategy going forwards.

“Unite has been aware of the threats hanging over Carillion for some time and we successful sought a meeting a number of months ago with the Chief Executive of the NI Housing Executive at which we demanded all jobs be safeguarded in the event of a collapse. At that time we received assurances that in the event of a liquidation the contract would be offered to an alternative operator so that there would be no discontinuity of employment or of the maintenance services for tenants.

“Unfortunately today, our members have reported that when employees presented for work this morning they were instructed to go home. Agency workers were told that they should return to their employment agency for further instructions and those who drove vehicles were instructed to remove all personal possessions and return them. It is clear that despite those assurances from the Housing Executive we are facing the threat of large-scale redundancy.

“Unite is demanding that the Housing Executive follow through on their promises to our union. To that end we are demanding that all workers, including those employed through agencies, need to be provided with immediate and secure public sector employment through the Direct Labour Organisation (DLO). The DLO already provides social housing maintenance services in some parts of Northern Ireland and on the three previous occasions when contractors have gone into liquidation in the past, the approach of taking workers back into the DLO has worked well. It is the best way forward – for both workers and social housing tenants – and today the demand for direct employment received the unanimous support of the hundreds of Carillion workers gathered in our regional offices.

“The Department of Social Development must take this opportunity to reverse the ideologically-driven agenda of outsourcing more and more public services to private sector contractors. The prevalence of uneconomic tendering by companies which play loose and fast with the rights and entitlements of their employees as well as tenants means that the long-term costs of this approach are far greater than retaining the conduct of these public services in-house.

“As well as continuing to engage with our members working for Carillion in the coming days, we will be coordinating our efforts with those of our colleagues nationally who represent the interests of the tens of thousands of Carillion employees across all parts of the UK. As the largest trade union in Britain and Ireland, Unite has the financial and legal resources necessary to defend these workers. The threat posed to employees by Carillion’s collapse once again reinforces the vital importance of working people joining a ‘fight-back’ union like Unite who can, and will, defend their interests”.