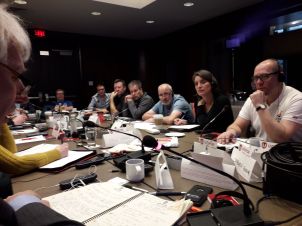 A Unite delegation representing Bombardier workers in Northern Ireland which arrived in Montreal on Sunday [December 10th] will be leaving to go to Washington D.C. after two days of meetings with trade union representatives of Canadian co-workers, Bombardier corporate management and leading politicians. Earlier today the delegation met with the Chief Executive of Bombardier Alain Bellemare.

The whirlwind lobbying push seeks to safeguard Northern Ireland jobs ahead of the US Department of Commerce’s final determination on whether to slap tariffs of 300 per cent on Bombardier C-series passenger jets. The second leg which will start as soon as they arrive in Washington DC as the delegation head to Capitol Hill to call on US politicians and the Department of Commerce to drop the threat of ‘crushing’ tariffs on C-series planes and determine that Boeing’s case is without merit.

While in Washington, the Unite delegation also expects to enlist the support of the European Union and the Irish and the UK ambassadors to the US.

“In our meetings with representatives of Unifor, the largest private sector union in Canada, and our equivalent for workers in Bombardier and in their supply chain there – it is clear that there is a commonality of our concerns in regard to the threat posed by the imposition of crushing tariffs on the C Series.

“Today we also met with representatives of the US workforce of Pratt & Witney who produce the engines for the C Series and who are based in the United States. The punitive tariffs being threatened by the US Trump administration will have a significant impact on Bombardier’s extended US supply-chain. The interconnections in modern-day, globalised supply-chains means that workers everywhere will be left paying the price in any trade war involving the United States.

“Unlike our own government, the Canadian Prime Minister Justin Trudeau and his government have made it clear that Boeing’s corporate bullying which threatens tens of thousands of jobs globally will result in entirely avoidable and unnecessary adverse consequences for that company. Since the threat of these tariffs has been raised the Canadian government has confirmed that Boeing will not be given the contract for replacing the Canadian F-18 fleet with Boeing Super Hornets.

“Our members in Bombardier believe that by comparison there is a complete absence of a strategic approach from the UK government. We now need to see the UK government adopting a similarly robust stance with Boeing to defend jobs in Northern Ireland.

“When we arrive in Washington we will be seeking meeting with as many leading US politicians as possible. We will convey the fact that Boeing’s allegations are without merit as they suffered no injury in the Delta airlines purchase as they don’t have an aircraft in that category. We also want to highlight the devastating impact the potential closure of Bombardier facilities in Northern Ireland could have on the local and regional economies at a time of political uncertainty”, Ms Fitzgerald concluded.