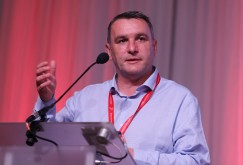 Unite’s Regional Coordinating Officer for Northern Ireland, Davy Thompson, expressed disappointment that the US Secretary for Commerce offered nothing to workers in Northern Ireland and called on him to meet with workforce representatives during his stay in the UK:

“Today’s announcement by the US Commerce Secretary represents nothing less than we would expect on his visit to London. He has simply reiterated that the US International Trade Commission and Department of Commerce will consider any changes in circumstances when finalising its proposals for a 300% tariff on Bombardier’s C Series aircraft.

“That is a routine statement offering no assurance whatsoever to the four thousand Bombardier workers in Northern Ireland or the 20,000 workers in the broader economy whose jobs are sustained by Bombardier activities.

“What’s needed is for the US government to rescind the punitive tariffs on the C Series entirely. They are designed to effectively shut the US market, the largest commercial airlines market in the world, to Bombardier’s ground-breaking C Series planes.

“Boeing’s case against Bombardier is entirely unmerited – they suffered no losses from the Delta airlines purchase at the heart of their allegation since they did not even have a bid competing for that contract.

“The US authorities know that such a baseless case is highly likely to be thrown out by the World Trade Organisation and the imposition of the exceptional 300% surcharges is designed to shut the US market to Bombardier’s product in the intervening period – likely to last years.

“If Wilbur Ross is genuine in his concern for Northern Ireland workers he should make the time available to meet with their representatives in the course of the next five days he is in London. Unite is ready to meet with him at his convenience””, Mr Thompson ended.