July 5th: On the second day of the ICTU Biennial Delegate Conference in Belfast, Brexit was one of the topics dominating debate.  Moving Unite’s motion on Brexit (Motion 29), Regional Secretary Jimmy Kelly said that ‘workers must not pay the price for a Tory Brexit’, and he highlighted his union’s call for state-led investment, re-nationalisation and re-directed public procurement:

“We need real investment in jobs and in a more regionally-balanced economy; an end to austerity and additional funding for public services; legislation for a ‘rate for the job’ culture.

By stopping unscrupulous employers exploiting migrant workers, we can raise the floor for all workers, thus reassuring many working-class communities.

We must resist the threats posed by Brexit – and we must grasp the opportunities it offers.

Control over trade may make it easier to protect our critical industries from anti-competitive practice, to increase sales in new markets and secure growth through import substitution.

Brexit could enable a step-change in government intervention and deficit-financed investment; allowing state-aid or equity stakes in key industries and even the renationalisation of critical sectors”, Jimmy Kelly said.

At a time when banks are returning to profit, Motion 25 highlighted the fact that spiralling branch closures are leaving communities without access to financial services.  Seconding the motion, Unite Regional Officer Colm Quinlan said that financial exclusion is growing as banks close branches while senior executive reap lotto-style payouts notwithstanding their role in the financial crisis. Mr Quinlan cited the example of ICC which was sold to Bank of Scotland, who pulled out of Ireland in 2010. The loan book was transferred to Certus which went into voluntary liquidation last year.

“The ICC, Bank of Scotland Ireland, Halifax and Certus saga eventually involved the closure of over 40 high street banking outlets and the loss of hundreds of  jobs – yet just last week we learnt that former Certus directors shared a €46 million bonanza.  The losers in this saga were bank workers, customers and communities throughout Ireland”, Colm Quinlan said.

Unite delegate Marie Casey used Motion 45, on the Irish public health system, to argue that healthcare in the Republic requires ‘radical surgery rather than a band-aid’:

“The Republic’s health system is in crisis.  According to the latest figures, 672,000 people are on a hospital waiting list, with over 85,000 waiting for inpatient care and over 478,000 waiting to be seen at an outpatient clinic.  And that does not include those waiting for a gastrointestinal check, or awaiting indicative dates for an annual check. 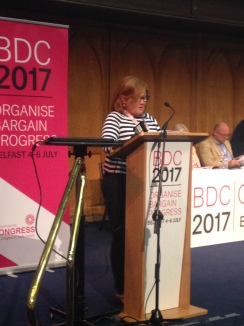 Access to healthcare is often determined by the cash in your wallet rather than your medical need, healthcare professionals are under increasing pressure – and people are literally dying for a solution to our healthcare crisis.

Meanwhile, successive governments apply band-aids to the problem, the two-tier system remains firmly in place, and the Government has declined to engage meaningfully with the report produced by the Committee on the Future of Health Care.

We don’t need band-aids.  We need radical surgery resulting in a universal, single-tier health system funded – as Unite has previously argued – social insurance and accessible to all on the basis of need”, Ms Casey said.