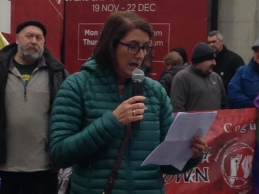 This is only a stop-gap solution; Northern Ireland women deserve full equality

June 29th: Taryn Trainor, Unite Equality Officer, welcomed the commitment by the Westminster government for a plan for financial support for women from Northern Ireland who are forced to have abortions in England. The commitment was secured as a desperate concession to head off defeat of the government in the face of cross-bench support for cost-free abortion rights for an amendment to the Queen’s Speech in Westminster.

“Women in Northern Ireland face a denial of our fundamental rights. Women in this part of the United Kingdom do not have the same reproductive rights as women in England, Scotland or Wales. We continue to be treated as second-class citizens. The fact that abortion is unavailable even in cases of rape, incest or non-viable pregnancies demonstrates the inhumane approach taken on this issue.

“This situation reflects a society where LGBT people are denied the right to marry, where communities continue to be divided, and where our political leaders are incapable of working together for the collective good.

“Today’s motion was secured following extended work by the London-Irish Abortion Rights campaign among others. Unite is proud to have supported this campaign who have won the right for Northern Ireland women to obtain an abortion on the English NHS at no cost. The Conservative government was forced to concede financial supports for women in the face of a revolt of their own members and cross-bench support for a Labour amendment to the Queens speech.

“While this is a victory for that campaign, this is only a stop-gap solution. It is shameful that due to the failure of our politicians to address this issue we continue to export our young women in such situations.

“There can be no justification for the decision to deny women in Northern Ireland rights and entitlements they receive in other parts of the United Kingdom. It is time that Westminster legislates over the heads of our political leaders and extends proper reproductive healthcare, including full rights to abortion, to vindicate Northern Ireland women’s human rights”, Ms Trainor concluded.