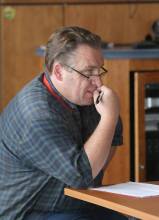 Unite the union will launch its Mark Ashton bursary this evening [7pm, Thursday May 18th] as part of LGBT awareness week.

The Chair of Unite’s LGBT committee, Francis Loughlin, spoke ahead of today’s launch event which will be held in the Conference room of Unite’s Antrim Road offices:

“This evening we will be launching our Mark Ashton bursary as part of the events organised across the city for LGBT Awareness week. The bursary will be launched by Jimmy Kelly, Ireland Secretary of Unite.

“This fund is a unique opportunity for younger people who want to engage in solidarity work with the LGBT community. Our union hopes that this seed funding will contribute to developing ideas in workplaces, youth groups and schools”, he ended.

Greg Sachno, Education Tutor for Unite who has been working closely with his union’s LGBT committee and the Rainbow project added,

“Mark Ashton was central to the organisation Lesbians and Gays Support the Miners during the great strike to defend jobs in 1984/85. His story was depicted in the recent film, Pride.

“Mark was raised in Portrush and is a contemporary hero for the Labour movement demonstrating the interconnection of the struggle of workers to defend themselves and the struggle of LGBT people against oppression based on their sexual identity.

“The establishment of a bursary is a natural progression having last year renamed the Education room in our Antrim Road office in his memory. This bursary is a long term acknowledgement of Mark’s continued political legacy”, Greg concluded.