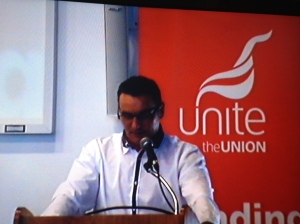 June 6th: Reacting to news that the Northern Ireland Assembly voted to amend a motion calling for a stand-alone Manufacturing Strategy and instead subsume it into a wider Economic Strategy, Unite Regional Coordinating Officer Davy Thompson said:

“Coming at the very beginning of the Assembly term, this is an unnecessary ‘own-goal’ and represents another missed opportunity to secure the future of this vital sector.

“Manufacturing contributes almost £20 billion in exports for Northern Ireland – revenue necessary to sustain quality public services as well as tens of thousands of value-added jobs within the supply chain.

“The decision to vote down proposals for a dedicated, stand-alone strategy for its future development casts a shadow over the sector at a time when unions and employers are collaborating closely to secure investment and growth. Only yesterday, Unite joined with Manufacturing NI to call on Stormont to unite behind this motion arguing that the future of the sector was too important to be made into a political football.

“Northern Ireland’s manufacturing sector has suffered a series of devastating closures and job-losses over the past eighteen months. The Executive’s response has been largely reactive as opposed to proactive in the face of these announcements.

“In many cases, decisions to disinvest from Northern Ireland could have been reversed or at least reduced with a timely and proactive approach. The sector is faced with a range of challenges including high energy and transport costs, inadequate skills and educational provision – areas where the NI Executive could play a much more positive role.

“Unite believes only a dedicated Manufacturing strategy will bring the focus and oversight necessary to ensure real action to meet these challenges and secure a positive future. Having manufacturing only one element of an economic strategy risks facilitating continued inaction and the threat of further job-losses in this sector”, Mr Thompson concluded.