Posted on March 6, 2016 by unitetheunion 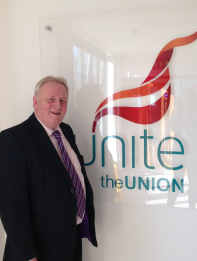 March 6th: Davy McMurray, Unite officer with responsibility for the union’s membership in S.P. Graham bookmakers has responded to the latest management pay offer following the breakdown of pay talks at the Labour Relations Agency:

“Management have offered workers a pay increase of four percent, and six percent this year. Ordinarily that would be a significant pay improvement but for the workers of S.P. Graham Ltd that leaves them only nine pence an hour above the lowest legally permissible rate of pay from April of this year.

“This pay offer does nothing to address the poverty pay on which our members are expected to live. Already the initial response from our members suggests they will reject it.

“Although they don’t publish their annual profits due to their ‘small company’ status, we know that S.P. Graham Ltd is a highly profitable company with a significant turnover. They can well afford to pay their workers a Living Wage.

“As it stands strike action voted unanimously by our members during Cheltenham festival dates remains unchanged. Even at this late stage we are asking management to share some of the company’s success, and become a fully accredited Living Wage employer”, Mr McMurray concluded.