Posted on March 3, 2016 by unitetheunion 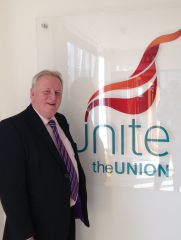 Strike action over poverty pay to commence during Cheltenham festival

March 3rd: Davy McMurray, Unite officer with responsibility for the union’s membership in Sean Graham bookmakers has highlighted the threats being faced by the workforce

“The attempted armed robbery at the S.P. Graham bookies on Grosvenor Road on Saturday February 20th, which was foiled by the brave actions of Unite members, highlights the nature of the threat posed to the overwhelmingly female workforce at this company.

“Unite has repeatedly raised the need for improved security, including protective barriers in all workplaces but unfortunately management does not appear to have any sense of urgency in bringing forward the necessary investment.

“S.P. Graham bookmakers can well afford to invest in staff security and pay a Living Wage to its workers but instead management are intent on paying the lowest legal wage to their workforce.

“The workers at S.P. Graham bookies are showing all those striving on the minimum wage across Northern Ireland how to stand up to poverty pay employers. They voted unanimously in a recent ballot for strike action to commence during the Cheltenham festival. Management know what they need to do to avoid this action”, Mr McMurray concluded.