Posted on February 23, 2016 by unitetheunion 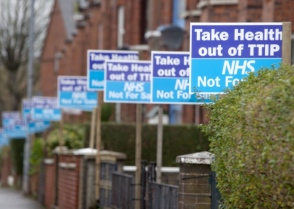 February 23rd: Responding to a detailed legal opinion supplied to his union, Ireland Secretary of Unite, Jimmy Kelly, expressed his concerns that the EU-US free trade deal the Trans-Atlantic Trade & Investment Partnership (TTIP) could potentially ‘lock-in’ privatisation in the NHS.

“Unite sought legal counsel from Michael Bowsher QC on the threat posed by TTIP. Unfortunately, his response has confirmed our worse fears about the deal. The agreement will give powers to private operators to legally challenge any decision made by a European government to return public services such as the NHS into public hands.

“The Tory government have sought to keep voters in the dark over deal’s potential impact on our health service. They have blocked access to legal advice showing its impact on the health service and the extent to which private health companies could sue the government using a secret tribunal system if a Whitehall policy change were to hit their profits.

“The UK government has no right to allow EU bureaucrats to negotiate away our ability to control the future of our NHS. David Cameron has the power to exclude the NHS from the trade deal – he must act and prevent the irreversible sale of our NHS”, Mr Kelly concluded.

TTIP would give investors new legal rights, which extend beyond both UK and EU law as well as NHS contracts, according to Michael Bowsher QC, a former chair of the Bar Council’s EU law committee who was tasked by Unite to prepare the advice.

“Were an NHS body either to award a contract in house or to a mutual without tender, a US healthcare company wishing to provide similar services to the NHS could claim that it had been discriminated against.

“Similarly, if at the end of a contract with a private entity the authority decided not to put it out for competition in future but to take the matter back in house or to cooperate with other authorities, one might well find that the entity deprived of the opportunity to re-compete would be looking to see whether that decision itself constitutes indirect expropriation.

“TTIP poses a real risk that if UK Government wished to change the arrangements for delivery of NHS services and either alter existing contractual arrangements, or seek to dispense with tendering for service contracts to do so, it may be exposed to a broader range of claims than the contracts would themselves afford.

“TTIP can be expected to have a range of consequences and it will not be possible to anticipate all of them. Given the substantial risks involved we do not see why a well-advised negotiator would not seek to ensure that the position of the NHS was protected. The safest course would be for the NHS to be the subject of a specific exclusion contained within the main body of the TTIP text.”