Posted on March 2, 2016 by unitetheunion 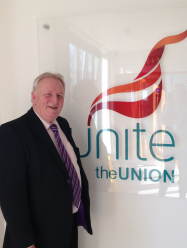 March 2nd: Davy McMurray, Unite officer with responsibility for the union’s membership in Sean Graham bookmakers has called on management to urgently address the issues of poverty pay and staff security ahead of planned strike action by workers:

“Following a 100% rejection of a management pay offer which would have left our members on the minimum wage payable under UK law, Unite balloted our members on their willingness to take industrial action. The unanimous result in support of taking strike action highlights the strength of feeling among our members and their determination to secure a Living Wage.

“Unite has repeatedly highlighted issues of concern for our members at Sean Graham bookies, who are overwhelmingly composed of female workers. These include personal security concerns over the absence of protective barriers and the absence of overtime rates or compensation for unsocial working hours.

“Even at this late stage, it is not too late for management to avoid unnecessary disruption by bringing forward a Living Wage pay proposal addressing the legitimate expectations of their valuable staff”, Mr McMurray concluded.