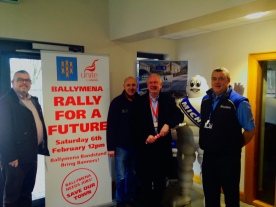 Ireland Secretary encourages workers to join Rally For A Future in Ballymena at noon on Saturday, February 6th

January 31st: Jimmy Kelly, Ireland Secretary of Unite the Union welcoming the enthusiasm that ‘Rally For A Future’ is generating in Ballymena and across Northern Ireland:

“The Rally for a Future initiative was initiated and has been driven by our members working in the JTI-Gallaher and Michelin factories in Ballymena. They decided that they would not be bystanders as their town suffered devastating job losses.

“From my discussions with those who are busy campaigning on the ground day after day, Rally For A Future, has really hit a chord and is being received with huge enthusiasm in the town.

“The public backing of Liam Neeson and the ringing endorsement of the campaign by Ballymena United Football Club has created a real buzz in the town. There’s also a growing awareness, and interest, from workers in other parts of Northern Ireland. Unite is now organising a number of buses to the rally from Belfast, Derry/Londonderry and Enniskillen/Omagh.

“This is a vital campaign for all manufacturing workers. We simply can’t accept that the sector is finished, as it appears Invest NI has. Ballymena, like many other parts of Northern Ireland, can offer a huge amount to foreign investors. But without a focussed effort that potential will be lost and Northern Ireland’s economy will be left imbalanced, without a strong manufacturing base.

“Rally For A Future is calling for our Ministers to have the same ambition for Manufacturing as we, and our members, have. They must ensure Invest NI reverses course. Our lead Economic Development agency must focus its resources on actively seeking to attract foreign-direct investment in Manufacturing to make up for the jobs lost in Ballymena before it is too late.

“We are calling for members of the public to join with workers from Ballymena, and across Northern Ireland, on Saturday February 6th to send a resounding demand for action for investment and jobs”, Mr Kelly concluded.